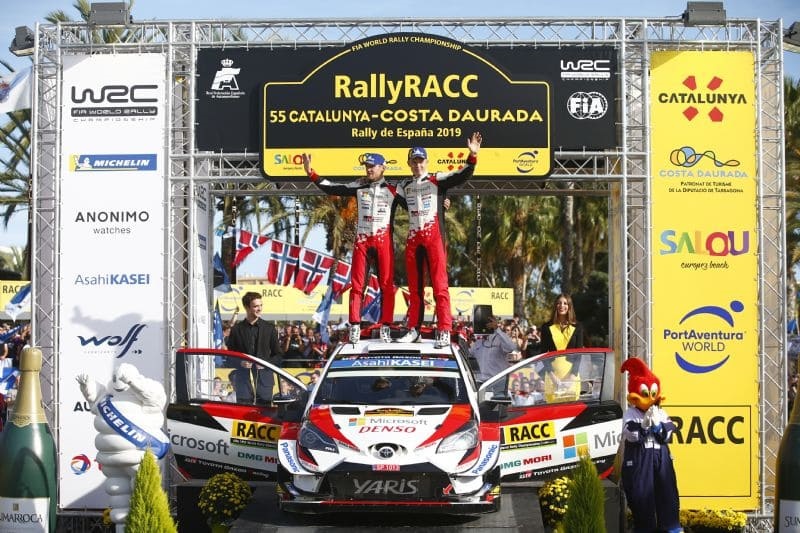 Tänak and Järveoja finished in second place in Spain after scoring four consecutive stage wins on Saturday before blasting through a sensational final Power Stage on Sunday that saw the pair finish 3.6 seconds ahead of the next car to take the full five bonus points.

Tänak is only the third different driver to claim the WRC drivers' crown since 2004, while he and Järveoja are the first Estonians to ever achieve the feat. It is the fifth occasion that a Toyota driver has won the WRC drivers' title, and the first time since Didier Auriol triumphed in 1994.

Having won six of the 12 rallies so far, Tänak arrived at the penultimate round of the season with a 28-point advantage in the championship.

Speaking after the event, Tänak said the massive pressure was a challenge to overcome but holding the trophy at the end of the race was a dream come true.

"I pushed hard and in the end it paid off. I've had to overcome a lot in my career, so it's nice to finally achieve this," Tänak said.

"Thank you to the team; they have done a great job," he said.

The second TGR Yaris WRC of Jari-Matti Latvala and co-driver Miikka Anttila finished in fifth place in Spain ensuring Toyota remains in contention to take out the prized WRC manufacturers' championship for the second year running.

Now only 18 points behind the leader, TGR needs a strong finish at the final round at Rally Australia next month to secure the championship.

TGR team principal Tommi Mäkinen said the win represented an historic achievement for the entire team and demonstrated the continuous teamwork throughout the whole season to reach this target.

"There has been a lot of pressure this weekend but what Ott did on the Power Stage, to do what he needed to get the title, was absolutely amazing," Mäkinen said.

"We have a new world champion and the second place helps us in the manufacturers' championship as well. We will still have a chance in Australia, and we will do our maximum there," he said.

Toyota will also be vying for the Australian Rally Championship (ARC) manufacturers' title at Rally Australia from November 14-17.

Rally Australia is centred around Coffs Harbour on the NSW coast with plenty of challenging stages through tight forest tracks and gravel roads combined with fast and flowing sections across open countryside, providing plenty of world-class rally action.